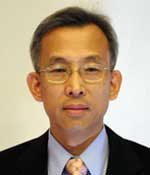 
"For groundbreaking contributions in theory and experiment that have advanced the understanding and utility of multiferroic oxides."


Sang-Wook Cheong obtained his Bachelor (mathematics, 1982) from Seoul National University, and Ph. D (Physics, 1989) from University of California, Los Angeles. He worked at Los Alamos National Laboratory for 1986-1989, and was a member of technical staff at Bell Laboratories (1989-2001). Since 1997, he has been a professor at Rutgers University. He became the founding director of Rutgers Center for Emergent Materials (2005-). His scientific field has been the physics of complex oxides, including multiferroics, colossal magnetoresistive oxides and high Tc superconductors.

Cheong became a fellow of American Physical Society in 2000, and has received a number of awards: Board of Trustees Award for Excellence in Research at Rutgers University (2003), Ho-Am Prize in Science from Samsung (2007), and KBS Global Korean Award (2009). He is currently a Divisional Associated Editor for Physical Review Letters, a Distinguished Professor at Pohang Science and Technology University, Korea, and a Distinguished Visiting Scholar, National Synchrotron Radiation Research Center, Taiwan.