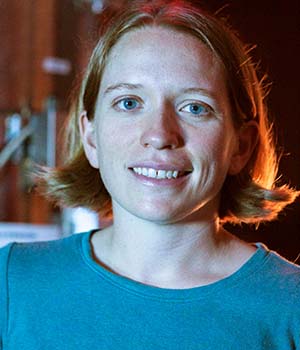 
"For creating the world's first quantum gas optical atomic clock and demonstrating a record long coherence time for light-matter interactions at 10 s and clock measurement precision of 3 parts in 10 to the 19th power."


Sara Campbell received her undergraduate degree in physics from MIT, where she first learned how fun it is to play with lasers from Martin Zwierlein’s group. Due to her work as the Society of Physics Students Vice President, she received the Joel Matthew Orloff Award for outstanding service to the physics department, Institute, or community. Sara also received a National Science Foundation Graduate Research Fellowship. Before starting graduate school, she attended a Critical Language Scholarship program with the United States Department of State to study Chinese in Beijing, and then spend a year at the Wuhan Institute of Physics and Mathematics, Chinese Academy of Sciences, as a visiting researcher. Sara then joined Jun Ye’s group at JILA, University of Colorado, Boulder and National Institute of Standards and Technology. For her PhD thesis which she received from the University of Colorado, Boulder in 2017, Sara and the rest of the strontium team designed and built a new apparatus to make a next-generation clock based on a degenerate Fermi gas in a three-dimensional optical lattice. Hooked on metrology, but wishing to measure something with more immediate applications, Sara is pursuing her postdoctoral research in cryogenic electron microscopy. Working with a collaboration with professors Holger Müller, Robert Glaeser and Eva Nogales, Sara and the rest of the team have demonstrated the first phase plate for electron microscopy that has a stable phase shift, based on the ponderomotive force from a 43 GW/cm2 continuous-wave laser. Sara received a Howard Hughes Medical Institute Hanna Gray Fellowship for postdoctoral support and early career research funding.