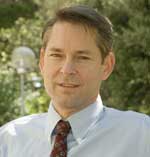 
Dr. Wilks received his B.A. degree in physics from U.C. Berkeley and his PhD. in plasma physics from U.C.L.A. in 1989 under the supervision of John Dawson. Since then, he has been a research scientist at Lawrence Livermore National Laboratory. His area of expertise is the application of computer simulation to the design and analysis of high intensity laser matter experiments. His work on applying Particle-In-Cell simulations to ultra-intense laser solid density plasma interactions led to several theoretical predictions about the interactions which were subsequently verified in experiment: namely, the ponderomotive scaling of hot electron temperatures, the presence of hundreds of megaGauss magnetic fields and hole boring of the laser pulse. This work played a key role in the early development of the fast ignitor concept. Recent work includes the development of a physical picture of ion acceleration, dubbed Target Normal Sheath Acceleration (TNSA). In 2002, he was awarded the Defense Programs Award of Excellence for his role in developing a novel hydrodynamics experimental campaign. Currently, he is investigating novel methods of creating high density, high temperature plasmas for laboratory astrophysics experiments. He is a lifetime member of the American Physical Society.