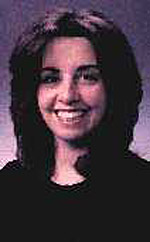 
"For her ingenious use of computational physics to probe a wide range of novel materials under different conditions, and for demonstrating the existence and nature of spatially-correlated dynamic heterogeneities in glass-forming liquids."


Dr. Sharon C. Glotzer is a physicist in the Polymers Division of the Materials Science and Engineering Laboratory at NIST, and the co-founder and director of the NIST Center for Theoretical and Computational Materials Science. She received a B.S. in Physics from UCLA in 1987, and a Ph.D. in Physics from Boston University in 1993 with Professor H. Eugene Stanley. Dr. Glotzer joined NIST in 1993 as a National Research Council postdoctoral fellow in the Polymers Division.

Dr. Glotzer is a recipient of the 1998 Presidential Early Career Award for Scientists and Engineers, the 1997 Department of Commerce Bronze Medal, a 1996 Senior Visiting Fellowship Award at the Centre for Chemical Physics, University of Western Ontario, an NRC Postdoctoral Fellowship Award from 1993-1995, a TRW Graduate Fellowship Award from 1987-1992, and the 1986 Sigma Delta Epsilon Society of Graduate Women in Science Scholarship Award for Exceptional Promise in Science. Her first paper, written while an undergraduate in 1987, was in 1991 voted ``One of the 50 Most Memorable Papers,''published in the American Journal of Physics. Dr. Glotzer has served the APS Division of Computational Physics as a member of the Nomination Committee and in vice-chairing the Metropolis Award committee. She is also a member of MRS, ACS, AIChE, and AAAS.