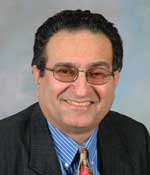 
"For seminal contributions toward establishing the theoretical underpinnings of nonlinear interactions between light and matter and for providing the field of  ultrafast spectroscopy with the tools to develop new non-linear methods based on his work."


Shaul Mukamel received his B.Sc degree in Chemical Physics in 1969 and his Ph.D. in 1976 both from Tel Aviv University. He served on the faculty of the Weizmann Institute and Rice University and in 1982 he joined the chemistry department of the University of Rochester and became a professor in 1985.  In 2000 he became the Kenneth Mees Professor and in 2003 was appointed joint Professor of Physics.  Since 2003 he serves on the faculty of UC Irvine as a Chancellor Professor of Chemistry.

Professor Mukamel's interests focus on  theoretical and computational studies   aimed at the design of novel ultrafast multidimensional coherent   nonlinear optical spectroscopies for probing  electronic and vibrational  dynamics   of molecules, biological complexes and semiconductor nanostructures.  The techniques span the infrared and visible to the attosecond  x-ray regime

He is an author of 650 publications and a textbook "Principles of Nonlinear Optical Spectroscopy" (Oxford, 1995).  He is a fellow of the Optical Society of America and of the American Physical Society, and a recipient of the Alexander van Humboldt, the Sloan, the Dreyfus, and  the Guggenheim Fellowships as well as  the  2003 Lippincott Award of OSA .
Selection Committee: