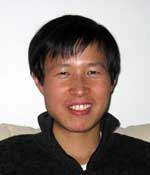 
"For the exact relations he derived for Strongly Interacting Fermi gases with large scattering length, which are found to be of fundamental importance in cold atom physics."


Shina Tan received his B.S. degree from Tsinghua University, China in 1997, his M.S. degree from the Institute of Theoretical Physics of the Chinese Academy of Sciences in 2000, and his Ph.D. in Physics from the University of Chicago in 2006. He was a Postdoctoral Research Associate at the Institute for Nuclear Theory (University of Washington) from 2006-2008 and a Postdoctoral Prize Fellow at Yale University from 2008-2010.  He joined the School of Physics of the Georgia Institute of Technology as an Assistant Professor in August of 2010.  Tan's major research interests to date have been the general quantum many-body problem and the few-body physics of ultracold atoms and molecules.  By inventing a new set of generalized functions, Tan solved the equivalent of the ultraviolet divergence problem for the strongly interacting Fermi gas with large scattering length and derived a set of exact relations for the energy, momentum distribution, and pair correlation function. The latter are now called the "Tan relations".   His results demonstrated that the behavior of the momentum distribution far away from the Fermi surface plays an essential role. Prof. Tan's research has significantly impacted both experimental and theoretical research in the field of cold atoms.