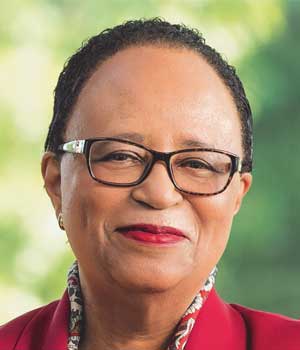 
"For distinguished application of her knowledge of physics to public service and increasing diversity in physics as Chair of the Nuclear Regulatory Commission and the president of Rensselaer Polytechnic Institute, and for service on many government, charitable, and corporate boards and committees."


The Honorable Shirley Ann Jackson, Ph.D., is the 18th president of Rensselaer Polytechnic Institute, the oldest technological research university in the United States, where she has led an extraordinary transformation since 1999.  Described by Time Magazine as “perhaps the ultimate role model for women in science,” Dr. Jackson has held senior leadership positions in academia, government, industry, and research. A theoretical physicist, Dr. Jackson holds an S.B. in Physics, and a Ph.D. in Theoretical Elementary Particle Physics, both from MIT.

Before taking the helm at Rensselaer, Dr. Jackson was Chairman of the U.S. Nuclear Regulatory Commission (NRC), from 1995 to 1999. At the NRC, Dr. Jackson conceived and promulgated risk-informed, performance-based regulation and created new planning, budgeting, and performance management process (PBPM). During her tenure at the NRC, Dr. Jackson spearheaded the formation of the International Nuclear Regulators Association (INRA) and served as its Chairman from 1997-1999.

Dr. Jackson is a Life Member of the MIT Corporation and a former Vice-Chair of the Board of Regents of the Smithsonian Institution. In October 2017, she was named Regent Emerita of the Smithsonian Institution. She serves on the boards of major corporations that include FedEx, IBM, and Medtronic. She is a former member of the board of the World Economic Forum USA (WEF USA), and the Council on Foreign Relations.

In 2007, describing her as “a national treasure,” the National Science Board selected Dr. Jackson as the recipient of the Vannevar Bush Award for “a lifetime of achievements in scientific research, public policy, and senior statesman-like contributions to public policy.” In 2016, United States President Barack Obama awarded Dr. Jackson the National Medal of Science, the nation’s highest honor in science and engineering.