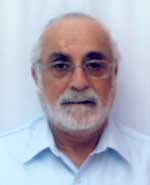 
"For his most generous sharing of good ideas with Ph.D. students and young colleagues from 30 countries that has enabled them to achieve important discoveries and develop into highly successful scientists."