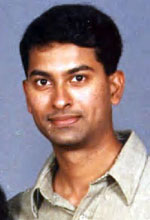 
"For his development of beam instability formalisms and diagnostics based on transient-domain beam measurements.
"


Shyam Prabhakar earned his B. Tech. degree in Electronics and Communications Engineering from the Indian Institute of Technology, Madras, India in 1992. He joined the Stanford University Applied Physics department in 1992, and held a Research Assistantship at the Stanford Linear Accelerator Center from 1993 through 1999. His research centered on instability control and beam diagnostics in particle accelerators and development of feedback systems. His Ph.D. dissertation "New Diagnostics and Cures for Coupled-Bunch Instabilities"was submitted to the Stanford University Department of Applied Physics in February 2000. This work has provided new methods to understand and control coupled bunch instabilities, and these techniques are in use with SLAC developed instability control systems at e+e- factory colliders and light sources in the US, Europe and Asia. This work has expanded the understanding of systems with unevenly filled bunch populations and highly-damped impedances, and has led to the development of new experimental techniques such as phase-space tracking which allow sensitive measurements of impedances and tune shifts from beam measurements. This work was sponsored by the Stanford Linear Accelerator Center under DOE contract DE-AC03-76SF00515, and the dissertation advisor was Professor John D. Fox of Stanford/SLAC.

Since February 2000 Dr. Prabhakar has been a postdoctoral scholar at Stanford University, working with Professor Samuel Karlin in the field of computational molecular biology. His current research centers on new methods to understand clustering protein structures and predicting protein folding pathways.