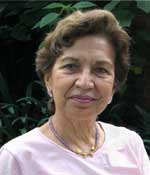 
"For outstanding work on the primordial helium abundance as well as abundances of other elements and their implications for cosmology and for the chemical evolution of galaxies and stars. This work is fundamental as a critical test for cosmological theories and the baryonic content of the Universe."


Silvia Torres-Peimbert received her BA in physics from the Universidad Nacional Autónoma de México, UNAM, in 1964 and her PhD in Astronomy from the University of California, Berkeley, in 1969. She has worked at the Instituto de Astronomía UNAM, since 1969, where she became Professor in 1973. She was director of the same institution from 1998 to 2002.

Her main field of study has been gaseous nebulae. One of her main interests has been the determination of the chemical composition of H II regions and planetary nebulae in our Galaxy and other galaxies, the study of the chemical evolution of galaxies and the determination of the primordial helium abundance based on very metal poor extragalactic H II regions. A significant part of her research has been in collaboration with Manuel Peimbert.