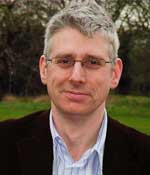 
Simon Hooker was awarded undergraduate and D.Phil degrees in Physics by the in 1986 and 1990 respectively. Following post-doctoral work with Colin Webb at , and at , he returned to the in 1996 to take up a Royal Society University Research Fellowship. He joined the faculty at in 2005 and was made Professor of Atomic and Laser Physics in 2008. He is a Fellow of Merton College, where he directs undergraduate teaching in Physics. The general area of s research is the investigation of applications arising from the interaction of high-intensity laser pulses with matter. He and his group have worked on development of bright sources of coherent short-wavelength radiation, such as optical field ionization lasers and quasi-phase-matched high-harmonic generation; the development and application of techniques for guiding high-intensity laser pulses, in particular plasma channels formed by capillary discharges; and laser-driven plasma accelerators and their application to radiation generation. He has also co-authored a textbook on Laser Physics, published by Oxford University Press. is a member of the and of the Optical Society of America.