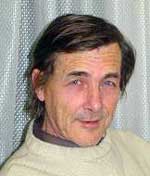 
"For pioneering and influential work on the enhancement of neutrino oscillations in matter, which is essential to a quantitative understanding of the solar neutrino flux."


Stanislav Mikheyev graduated from Moscow State University in 1965. He then became a researcher at Lebedev Physical Institute. Since 1970 he has been a researcher at the Institute for Nuclear Research of the Russian Academy of Sciences. He has worked on Baksan Underground Scintillator Telescope for a long time. He has been the leader of two experiments carried out on Baksan Telescope: observation of upward-going muons and searches for superheavy magnetic monopoles. He earned his Ph.D. in physics from the Institute for Nuclear Research in 1983. In 1985 Mikheyev and A. Smirnov considered the propagation of oscillating neutrinos in matter with varying density and suggested an explanation for the solar neutrino problem (the MSW effect). From 1991 to 1998 Mikheyev worked on the MACRO detector. His current activities are related to the Baksan Neutrino Observatory, the Baikal Neutrino Telescope and the T2K experiment. In 2006, Mikheyev, Smirnov and Wolfenstein were awarded the Bruno Pontecorvo Prize.