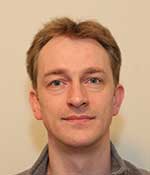 
"For innovative techniques of event simulation for high energy hadron colliders, enabling the comparison of theory and experiment with high precision."


Stefan Hoeche earned his degree from Dresden University of Technology in 2004 and his Ph.D. from Durham University in 2008. He was a postdoctoral research associate at the University of Zurich in Switzerland from 2008 to 2010 and at the SLAC National Accelerator Laboratory from 2010 to 2011. He is currently a staff scientist at the SLAC National Accelerator Laboratory. His research focuses on collider experiments, for which he develops computer simulations that describe every aspect of the complex multi-particle final states. Extending these calculations to higher orders in QCD perturbation theory is the key to successful measurements at the Large Hadron Collider; it allows for probing the Standard Model of particle physics at an unprecedented accuracy. Hoeche is also involved in the interpretation of collider data in terms of new physics models. He received the Department of Energy's Early Career Award in 2013 and the Wu-Ki Tung Award for Early-Career Research on QCD in 2014.