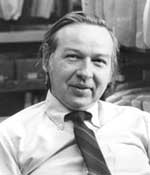 
"For his pioneering, in-depth studies in the history of nineteenth and twentieth century physics."


Stephen G. Brush studied physics and chemistry at Harvard (A. B., 1955) and Oxford (D. Phil., 1958). As a theoretical physicist at the Lawrence Livermore Laboratory, he helped to show that a one-component classical plasma could condense to an ordered solid state. Brushs research in statistical mechanics was complemented by an interest in the history of the kinetic theory of gases, described in a book The Kind of Motion We Call Heat, which won the Pfizer Award of History of Science Society. An advocate of the use of history in science teaching, he helped develop the (Harvard) Project Physics Course for high schools and coauthored, with Gerald Holton, Physics, the Human Adventure. At the University of Maryland since 1968, he started a new program in history of science. He published historical books on the origin of the solar system, the internal structure and age of the Earth, and the relation between science and culture. His current research is a crossdisciplinary study of the reasons why theories like the Periodic Table, Relativity, the Big Bang, and Natural Selection were accepted. Dr. Brush was founding editor of the APS/FHP History of Physics Newsletter. He is a member of the Académie Internationale d'Histoire des Sciences, and served a term as President of the History of Science Society.