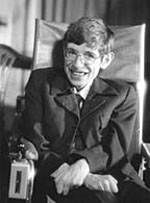 
"For boldness and creativity in gravitational physics, best illustrated by the prediction that black holes should emit black body radiation and evaporate, and for the special gift of making abstract ideas accessible and exciting to experts, generalists, and the public alike."


Dr. Hawking is an English theoretical physicist whose theory of exploding black holes drew upon both relativity theory and quantum mechanics. He also worked with space-time singularities.

Hawking studied mathematics and physics at University College, Oxford (B.A., 1962), and Trinity Hall, Cambridge (Ph.D., 1966). He was elected a research fellow at Gonville and Caius College at Cambridge. In the early 1960s Hawking contracted amyotrophic lateral sclerosis, an incurable degenerative neuromuscular disease. He continued to work despite the disease's progressively disabling effects.

Hawking worked primarily in the field of general relativity and particularly on the physics of black holes. In 1971 he suggested the formation, following the big bang, of numerous objects containing as much as 1,000,000,000 tons of mass but occupying only the space of a proton. These objects, called mini black holes, are unique in that their immense mass and gravity require that they be ruled by the laws of relativity, while their minute size requires that the laws of quantum mechanics apply to them also. In 1974 Hawking proposed that, in accordance with the predictions of quantum theory, black holes emit subatomic particles until they exhaust their energy and finally explode. Hawking's work greatly spurred efforts to theoretically delineate the properties of black holes, objects about which it was previously thought that nothing could be known. His work was also important because it showed these properties' relationship to the laws of classical thermodynamics and quantum mechanics.

Hawking's contributions to physics earned him many exceptional honours. In 1974 the Royal Society elected him one of its youngest fellows. He became professor of gravitational physics at Cambridge in 1977, and in 1979 he was appointed to Cambridge's Lucasian professorship of mathematics, a post once held by Isaac Newton.

His many publications include The Large Scale Structure of Spacetime (1973) with G F R Ellis, General Relativity: An Einstein Centenary Survey, with W Israel, Superspace and Supergravity (1981), The Very Early Universe (1983) and 300 Years of Gravity, with W Israel. Stephen Hawking has two popular books published; his best seller A Brief History of Time (1988) and his later book, Black Holes and Baby Universes and Other Essays.

Professor Hawking has twelve honorary degrees, was awarded the CBE in 1982, and was made a Companion of Honour in 1989. He is the recipient of many awards, medals and prizes and is a Fellow of The Royal Society and a Member of the US National Academy of Sciences.

Stephen Hawking continues to combine family life (he has three children), and his research into theoretical physics together with an extensive programme of travel and public lectures.