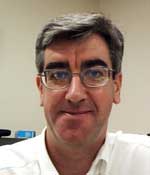 
Steve Pearton received his B.S. degree in Physics from University of Tasmania in 1978 and a Ph.D from University of Tasmania in 1983.  He was a postdoc at UC Berkeley prior to joining AT&T Bell Laboratories. He joined the University of Florida in 1994 where he is Distinguished Professor and Alumni Chair in the Department of Materials Science and Engineering. Steve has been a key figure in developing processing techniques used in compound semiconductor electronics and photonics. At Bell Labs he developed the use of ion implantation, dry etching and contact technologies in successive generations of compound semiconductor devices. At UF, Dr. Pearton has primarily focused on fabrication processes for blue/green/UV GaN-based LEDs, laser diodes and power electronics. The LEDs are used in displays, automotive lighting and general illumination when combined with phosphors. His most recent interests have been in developing solid state sensors. His publications have been cited over 35,000 times in the literature. He is a Fellow of APS, IEEE, AVS, ECS, MRS and TMS. He received the 2005 Electronics Division Award from ECS, 2007 John Thornton Award from AVS, 2007 J.J. Ebers Award from IEEE and the 2011 Bardeen Award from TMS.