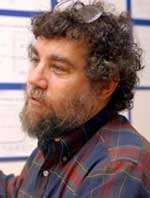 
"For his originality in the direct measurement of forces and motions in single biomolecular complexes undergoing the nucleoside triphosphate hydrolysis reactions that drive intracellular transport, cell motility, and DNA and RNA replication."


Steven M. Block holds the Ascherman Chair of Sciences in the Departments. of Applied Physics and Biological Sciences at Stanford University. He earned Hon. BA and MA degrees in physics at Oxford University (1974;1978), a master's in biology at the University of Colorado (1982); and a Ph.D. in biophysics at Caltech (1983). He served as staff scientist at the Rowland Institute for Science in Cambridge, and Lecturer at Harvard University (1987-1993), then Professor of molecular biology at Princeton University (1994-1999), before joining Stanford University (1999-present). Block has been elected to the American Academy of Arts & Sciences, the American Association for the Advancement of Science, and the National Academy of Sciences. He received the Young Investigator Award of the Biophysical Society (1994) and later served as its President (2005-2006). He received the 2006 Award for Research in Nanotechnology from the University of Pennsylvania and the 2007 Outstanding Investigator in Single Molecule Biophysics Award of the Biophysical Society. Blocks interdisciplinary research lies at the interface of physics and biology, particularly in the study of molecular motors, such as kinesin and RNA polymerase. His laboratory has pioneered the use of laser-based optical traps, also called optical tweezers, to study the nanoscale motions of individual biomolecules.