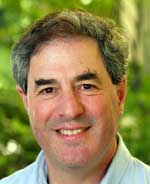 
"For his creation of the new spectroscopic technique of vibrational Stark spectroscopy, and its insightful applications to a variety of condensed phase systems, including the bacterial photosynthetic reaction center."


Steven G. Boxer is the Camille and Henry Dreyfus Professor in the department of chemistry at Stanford University. He received his B.S. from Tufts University in 1969 and his Ph.D. from the University of Chicago in 1976, interrupted by 2 years of civilian alternate service as a conscientious objector. He began his career as an Assistant Professor at Stanford and rose through the ranks to his current position. His research interests are at the interface of physical chemistry, biology and engineering. Topics of current interest include: electron and energy transfer mechanisms in photosynthesis, electrostatics and dynamics in proteins, Stark spectroscopy, the fabrication of artificial systems to simulate, manipulate and image biological membranes and their interactions, and the excited state dynamics of green fluorescent protein. He is an elected Fellow of the American Academy of Arts and Sciences (1997) and of the Biophysical Society (2007). He received the Max Tishler Award from Tufts University, an American Chemical Society Cope Scholar Award, and the American Society for Photobiology Research Award, as well as many named lectureships all over the world.