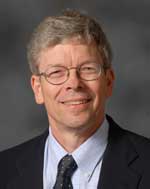 
After completing high school in a class of five students in the small village of Brant Lake, NY, Steven Girvin went on to obtain a B.S. in physics from Bates College in 1971 and master's degrees in physics from the University of Maine and Princeton University, where he also received his Ph.D. in 1977. He did his postdoctoral research at Indiana University and the Chalmers University in Göteborg, Sweden. After serving as a physicists at the National Bureau of Standards (now NIST) from 1970 to 1987, Girvin joined the faculty of Indiana University along with Allan MacDonald. Girvin came to Yale in 2002 where he is now Eugene Higgins Professor of Physics and Professor of Applied Physics. He is a Fellow of the American Physical Society and of the American Academy of Arts and Sciences, and in 2006 he was elected to the National Academy of Sciences. Girvin's research has focused on strongly correlated quantum states of matter and the quantum phase transitions which separate them. He is currently working closely with his experimental colleagues Robert Schoelkopf and Michel Devoret on developing circuit QED, the quantum optics of superconducting electrical circuits.