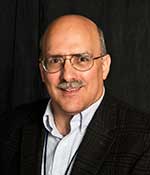 
"For seminal joint research providing key understanding and quantitative verification of global mode stability in experimental high performance tokamak plasmas, based on drift-kinetic MHD theory, and made possible by strong and essential partnership between Europe and the USA."


Steven A. Sabbagh, Ph.D., is a senior research scientist and adjunct professor of applied physics at Columbia University, on a long-term assignment at the Princeton University Plasma Physics Laboratory (N.J.). He was awarded a B.S. degree from Columbia University (N.Y.) in 1984, an M.S. in 1985, a M.Phil. in 1988, and a Ph.D. in 1990. He directs, organizes, and conducts research in a collaboration between Columbia and PPPL as principal investigator for research on magnetohydrodynamic plasma stability on the National Spherical Torus Experiment - Upgrade (NSTX-U) and the Korea Superconducting Tokamak Advanced Research (KSTAR). His present scientific endeavors include research on the physics of macroscopic stability of magnetically confined fusion plasmas and their control by active means, neoclassical toroidal viscosity in tokamak plasmas created by three-dimensional magnetic fields, and the prevention of disruptions in tokamak plasmas. He has merited a number of awards including the Kaul Foundation Prize for Excellence in Plasma Physics Research and Technology Development, the International Atomic Energy Agency Nuclear Fusion Award, and the Institute of Electrical and Electronics Engineers Nuclear and Plasma Sciences Society Graduate Scholarship Award. He was elected an American Physical Society fellow in 2010.