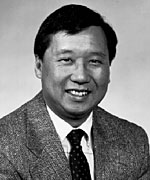 
"For his predictive theoretical studies of surfaces and interfaces."


Dr. Louie is a Professor of Physics at the University of California at Berkeley and faculty senior scientist at the Lawrence Berkeley National Laboratory. He was born in China and became a U.S. citizen in 1961. He received his BA degree in Mathematics and Physics in 1972 and his Ph.D. degree in Physics in 1976, all from the University of California at Berkeley.

After working at the IBM Watson Research Center, the AT&T Bell Laboratories at Murray Hill, and the University of Pennsylvania, he joined the UC Berkeley faculty in 1980. His research interests are on the electronic and structural properties of solids, surfaces, clusters, and nanotubes, and on many-electron effects in the spectroscopic properties of bulk and reduced dimensional materials systems.

Dr. Louie is a Fellow of the American Physical Society and a member of the Materials Research Society. He has been awarded a Sloan Fellowship, a Guggenheim Fellowship, two Miller Research Professorships, the U.S. Department of Energy Award for Sustained Outstanding Research in Solid State Physics, an Outstanding Performance Award of the Lawrence Berkeley National Laboratory, and the 1996 Rahman Prize in Computational Physics of the APS.