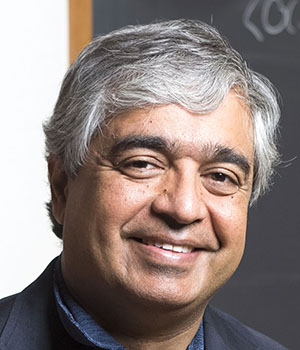 
"for his seminal contributions to the theory of quantum phase transitions, quantum magnetism, and fractionalized spin liquids, and for his leadership in the physics community."


Sachdev received his B.S. from the Massachusetts Institute of Technology in 1982, and a Ph.D. from Harvard University in 1985. He is the Herchel Smith Professor of Physics at Harvard University. He also holds visiting positions as the Cenovus Energy James Clerk Maxwell Chair at the Perimeter Institute in Ontario, Canada, and the Homi J. Bhabha Chair at the Tata Institute of Fundamental Research, Mumbai. Sachdev has explored the diverse entangled states of quantum matter: states with bulk topological order, with and without an energy gap to excitations, and critical states without quasiparticle excitations. Many of these studies have been linked to experiments, especially to the rich phase diagrams of the high temperature superconductors. He has described quantum phase transitions which depend not only on broken symmetry and order parameters, but also on topological order, emergent gauge fields, and Fermi surfaces. Sachdev argued that states of quantum matter without quasiparticles are characterized by the fastest possible thermalization rate of order Planck’s constant/absolute temperature, and has described implications for experiments, and the connections to dual theories of quantum black holes. Sachdev is a fellow of the American Physical Society, and of the National Academy of Sciences. He held the Lorentz chair (Leiden) in 2012, and was the International Centre for Theoretical Physics (Trieste) Salam Distinguished Lecturer in 2014. He was awarded the Dirac Medal (University of New South Wales) in 2015.