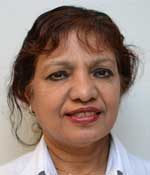 
"For efforts to promote physics research and teaching through collaboration, mentoring, and philanthropy in several third-world countries, and in particular for her promotion, as both an advocate and role model, of Muslim women scientists."


Sultana Nurun Nahar, an atomic astrophysicist at the Ohio State University, received her B.Sc.Hons in physics in 1977 and M.Sc. in theoretical physics in 1979 from Dhaka University in Bangladesh, standing the first position in rank in both and holds the record for the first woman to achieve them. She received the Salekunnesa award for the best female student in B.Sc.Hons examination. She received M.A. in Quantum Optics in 1984 and Ph.D. In  atomic theory in 1987 from Wayne State University. At Wayne State, she received Knoller Fellowship in physics. Thomas Rumble University Graduate Fellowship, and Daniel Gustafson memorial award for excellence in teaching by a graduate student. After a postdoctoral position at the Georgia State University, she moved to the Ohio State University with a fellowship from the college of physical and mathematical sciences in 1990. Her research is on atomic processes of photoionization, electron-ion recombination, photoexcitation, collision. Her contributions include development of the unified method for total electron-ion recombination, theoretical spectroscopy for Breit-Pauli R-matrix method, resonant nano-plasma theranostics (RNPT) method for cancer treatment. She has published about 140 scientific articles and is the co-author of the textbook "Atomic Astrophysics and Spectroscopy". She has an on-line database named NORAD-Atomic-Data. She is involved in promoting physics research and education in a number of countries and is the founder of International Society of Muslim Women in Science. She is an APS Fellow, recipient of the highest honor gold medal from the Topical Society of Laser Sciences.