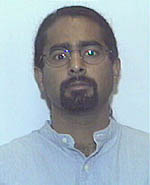 
"For his versatile and extensive contributions to the detectors, hardware, electronics, software, and analysis of the results of the Cryogenic Dark Matter Search (CDMS) experiment, which provided the most sensitive upper limits for elastic scattering of Weakly Interacting Massive Particles (WIMP) on nucleons. The result rules out a significant region of parameter space for one of the major candidates for dark matter in the universe."


Sunil Golwala was born in 1972 in Detroit, Michigan and raised nearby in Grosse Pointe. Dr. Golwala received a B.A. in Physics from the University of Chicago in 1993, having worked as an undergraduate research assistant for Prof. Rene Ong on the Chicago Air Shower Array. His undergraduate thesis studied the use of a small array of air Cerenkov telescopes for measurement of the composition of ultra-high-energy cosmic rays. Dr. Golwala performed doctoral work at the University of California, Berkeley, on the Cryogenic Dark Matter Search (CDMS) under the supervision of Prof. Bernard Sadoulet, receiving a Ph.D. in Physics in December, 2000. This experiment searches for direct interactions of Weakly Interacting Massive Particle (WIMP) dark matter using cryogenic particle detectors capable of discriminating WIMP-induced nuclear recoils from electron recoils via measurement of phonon and electron-hole pair production.

Dr. Golwala's dissertation work consisted of participation in the preparation, execution, and analysis of a year-long run of these detectors. This data set provides the most sensitive exclusion limits to date on the WIMP-nucleon cross-section and calls into question the claimed detection of the annual modulation signature of WIMP interactions by other researchers. Dr. Golwala also participated in studies of the feasibility of using normal metal-insulator- superconductor tunnel junctions in phonon-mediated particle detectors and on electrothermal noise effects in such junctions, supported partly by a Department of Education graduate fellowship.

In July, 2000, Dr. Golwala joined Prof. Andrew Lange's group at Caltech as a Millikan Postdoctoral Scholar to work on BOLOCAM, a 144-pixel millimeter-wave bolometer camera. This instrument will be used to observe the Sunyaev-Zeldovich effect in distant galaxy clusters, search for secondary anisotropy of the cosmic microwave background radiation on arcminute scales, and do surveys for ultraluminous, high-redshift, dust-enshrouded starburst galaxies and active galactic nuclei. Dr. Golwala is a member of the APS and AAS.