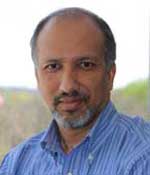 
"For seminal contributions to the science of silicon microelectronics and particularly, the development of high dielectric constant oxide transistor technology."


Supratik Guha is the Director of Physical Sciences at IBM Research, responsible for IBM’s worldwide strategy in the physical sciences. Supratik pioneered the materials research that led to IBM’s high dielectric constant oxide-metal gate technology, extensively used today both in high performance and low power microprocessor products such as servers and mobile phones. He received his Ph.D. in materials science from the University of Southern California in 1991, and his B. Tech from the Indian Institute of Technology, Kharagpur, in 1985. From 1991-1992 he was at IBM Research as a post-doc in the Esaki-Chang group, and then was a staff member at the 3M Corporate Research Labs from 1992-1995 where he worked in the research group that pioneered the blue II-VI semiconductor injection laser. He returned to IBM Research in 1995 as a Research Staff Member. His own current technical work is in new materials for electronics and energy conversion applications, and sensor based physical analytics. As a manager he has initiated or expanded several successful programs at IBM such as silicon photonics, quantum computing, carbon electronics, photovoltaics, and sensor based analytics. He is a Fellow of the Materials Research Society and the American Physical Society. He is also an Adjunct Professor at Columbia University.