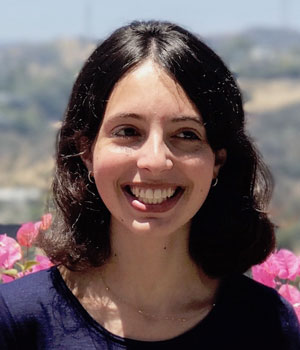 
"For original contributions to understanding the outer solar system, including characterizing the dynamical properties of hundreds of new objects in the Kuiper Belt; establishing the orbital stability of a new dwarf planet; and investigating the effects of a hypothesized distant new planet."

Tali Khain graduated with a double major in physics and mathematics from the University of Michigan in May 2019. Her undergraduate research focused on the orbital dynamics of small, rocky bodies found in the outer solar system, called Kuiper belt objects (KBOs). Due to perturbations from the planets in our solar system, the orbits of these KBOs change in time, resulting in non-trivial dynamical behaviors. In addition to studying the different modes of orbital evolution of these objects, Tali worked on the fascinating Planet Nine hypothesis, a recent prediction of an additional distant planet in the solar system. With a combination of numerical and analytic techniques, Tali identified the stable KBO populations allowed by Planet Nine and explored a number of new mechanisms that arise in the presence of this additional perturber. Her research in the area of celestial mechanics and dynamical astronomy has led to over ten refereed publications and won the Barry Goldwater and Astronaut scholarships. This work was done in collaboration with and under the supervision of wonderful mentors both at Michigan (David Gerdes, Fred Adams, Juliette Becker) and at a Caltech summer program (Konstantin Batygin, Mike Brown). Tali began her graduate work in physics at the University of Chicago in Fall 2019, where she is pursuing soft matter research with the support of the NSF Graduate Research Fellowship. Tali is a member of the American Physical Society and the American Astronomical Society.