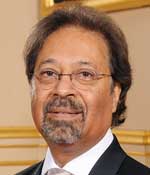 
"For distinguished leadership in the conception, design and construction of the ATLAS and CMS detectors, which were instrumental in the discovery of the Higgs boson."


Professor Sir Tejinder Singh Virdee, F.R.S., is a professor of physics at Imperial College London. At the end of the UA1 experiment in1990, where W and Z bosons were discovered, Prof. Virdee concentrated on the physics and experimentation at CERN’s large hadron collider (LHC) in Geneva, Switzerland. He has played a major role in all phases of the experiment, from conception and design, through construction, to the extraction of the science that has already lasted 25 years. Prof. Virdee was involved in almost all the major choices made for the experiment and in predicting the physics performance. He pioneered some of the techniques used in its calorimeters, crucial for the discovery of a Higgs boson announced by the CMS and the A Toroidal LHC Apparatus (ATLAS) experiments. Prof. Virdee was the the Compact Muon Solenoid (CMS) collaboration’s spokesperson at the start of collision data taking, from 2007 to 2010, and was its deputy spokesperson from 1993 to 2006. Prof. Virdee’s current work involves studies of the newly found Higgs boson, search for physics beyond the standard model of particle physics, and the design of the upgrades of the CMS detector for very high luminosity LHC running, which is due to start in mid-2020’s. He is pioneering a novel technique to replace the CMS’s endcap calorimetry that uses silicon sensors and implements very fine lateral and longitudinal segmentation, including precision timing information. Among the prizes he has won are the 2009 U.K. Institute of Physics (IOP) Chadwick Medal and Prize, the 2013 European Physical Society-High Energy Particle Physics Prize, the 2013 Fundamental Physics Prize, and the 2015 IOP Glazebrook Medal and Prize. In 2012, Prof. Virdee was elected as a fellow of the Royal Society and of the U.K. IOP and was made Knight Bachelor in the 2014 Queen’s Birthday Honours List. Prof. Tejinder Virdee received his B.Sc. in 1974 from Queen Mary University of London (U.K) and his Ph.D from Imperial College London (U.K.) in 1979.