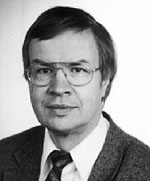 
"For his many outstanding contributions to laser spectroscopy including his extraordinary measurement of the spectrum of atomic hydrogen."

He received his Masters Degree (Dipl. Phys., 1966) and Doctorate (Dr. Rer. Nat., 1969) from the University of Heidelberg. In 1970 he came to the US where he joined the Physics Department of Stanford University as an Associate Professor in 1972. From 1975 until he returned to his native Germany in 1986, he served as a full Professor at Stanford.

His research interests include test of basic physics laws with techniques of precise laser spectroscopy and the cooling and manipulation of atomic matter with laser light.