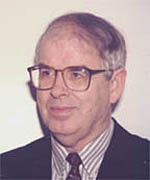 
Dr. Theodore Alan Fulton was born in Washington, Iowa and now lives in New Jersey. He received his BS degree in Engineering Physics from the University of Colorado in 1961 and a Ph.D. in Experimental Physics from Cornell University in 1966. Hen then joined Bell Laboratories in Murray Hill, New Jersey, where he ultimately became a Distinguished Member of the Technical Staff. There he has worked closely with many valued colleagues, at first on Josephson-junctions and recently on single-electron phenomena. He retired from Bell Laboratories in 1996, but has remained involved there as a consultant. Currently he is a part of an ongoing collaboration that employs a scanning electrometer based on the single-electron transistor to obtain sub-micron images of surface electric fields, most recently in regard to Quantum Hall behavior in a GaAs/AlGaAs heterostructure.

Dr. Fulton is a member and Fellow of the APS.