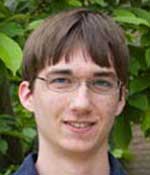 
"The Standard Model Extension and its Application to Hydrogen."


Theodore Yoder received a B.A. (with honors) in physics, a B.A. in mathematics, and a minor in computer science from Franklin & Marshall College in May 2012.  For his senior thesis advised by Dr. Gregory Adkins, Ted calculated corrections to the hydrogen spectrum using the Standard Model Extension (SME), which makes the phenomenological addition of Lorentz and CPT violation to the standard model. While partial corrections were previously found, this was the first full calculation through first order in all the SME proton and electron parameters and second order in the fine-structure constant.

In 2010, Ted worked with Dr. Adkins to calculate photon correlations from the decay of orthopositronium and also published on the so-called ellipsoid paradox in thermodynamics. During the summer of 2011, for an REU at Bucknell University, Ted worked with Dr. Michael Frey on a quantum information problem, the use of dissonant states in process tomography.

Among other awards, Ted received the 2010 Barry M. Goldwater Scholarship and the Michael J. Mumma Prize. He was also inducted into the ΣΠΣ, ΠΜΕ, and ϕβΚ honor societies. Ted is now pursuing a physics Ph.D. at the Massachussetts Institute of Technology, with a particular interest in quantum information and computing.