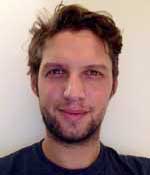 
Thibault Peyronel grew up in Paris, France where he pursued his undergraduate studies and master's degree at Louis-Le-Grand preparatory classes and Ecole Polytechnique. His undergraduate research included BEC experiments in Christopher Foot's group at the University of Oxford. His master thesis was carried out on 2D Bose gases under the supervision of Isabelle Bouchoule at the Institut d' Optique in Palaiseau. He then joined Vladan Vuletic' s group at MIT for his PhD. There he focused on creating media in which photons interact strongly with one another. He first joined an effort using cold atoms loaded in the hollow-core of a photonic crystal fiber in order to achieve low-light optical nonlinearities. Thibault then built an experiment harnessing the long-range interactions between Rydberg states to generate large nonlinearities at the single photon level. A first important result was the conversion of coherent light into a stream of single photons at the output of a laser-cooled atomic vapor. He then showed that in the same quantum nonlinear medium, photons can become massive particles with attractive forces which bind into molecules of light. These experiments, done in collaboration with Misha Lukin' s group at Harvard, pave the way for all-optical quantum information science and the production of new exotic states of light. Thibault is currently a Postdoctoral Fellow at the Harvard Quantum Optics Center, where he works on interfacing individual p