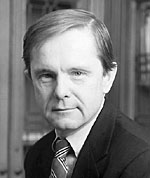 
"For his pioneering work on charmonium and on the de-coupling of heavy particles."


Dr. Applequist received his BS in physics from Illinois Benedictine College and his Ph.D. from Cornell University in 1968. From 1968 to 1970 he held a postdoctoral appointment at the Stanford Linear Accelerator Center, and in 1970, he joined the faculty at Harvard University. In 1975 he moved to Yale University and was appointed Professor of Physics in 1976. In 1991 he was named Eugene Higgins Professor of Physics and in 1993 he was appointed Dean of the Graduate School at Yale.

Dr. Applequist is a fellow of the APS, recipient of a Senior US Scientist Award from the Alexander von Humboldt Foundation, and a Fellow of the AAAS. He has served on many distinguished advisory committees including the National Science Foundation, the DOE and the APS. In 1989 to 1993 he was a member of the Scientific Policy Committee of the Superconducting Supercollider Laboratory.

His research has focused on the theory of elementary particles, including the strong interactions and electroweak unification. His most recent interests have dealt with dynamical electroweak symmetry breaking and the origin of the quark and lepton masses.