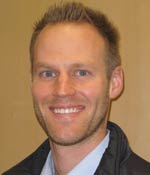 
"For measurement of the rate of muon capture in hydrogen gas and determination of the proton's pseudoscalar coupling."


Thomas I. Banks received an A.B. degree magna cum laude in May 1999 from Cornell University, where he was awarded the Kieval Prize in Physics. That same year Tom entered graduate school at the University of California, Berkeley, to continue his physics studies. In 2001 he joined the Berkeley group collaborating on the MuCap experiment, which sought to make a precision measurement of the muon capture rate in hydrogen gas in order to resolve the controversy surrounding the value of the nucleons electroweak pseudoscalar coupling. Working under the supervision of Professor Stuart Freedman, Tom received a Ph.D. in 2007 for his dissertation describing the results of his analysis of the first MuCap data.

Tom is currently a postdoctoral researcher at Berkeley, where he has developed a new calibration system for the KamLAND neutrino experiment and contributes to the CUORE neutrinoless double beta decay experiment.