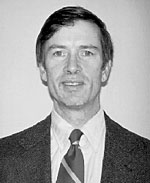 
"For his seminal elucidation of the characteristics and collisional behavior of highly excited states of atoms."


Thomas F. Gallagher was born in Bronxville, New York in 1944. He received a BA in Physics from Williams College in 1966 and an MA and a Ph.D., both in physics from Harvard University in 1968 and 1971 respectively. After a year as a research associate at the University of Utah, he spent the next twelve years at SRI International (formerly Stanford Research Institute). In 1984 he moved to the University of Virginia, where he is now the Jesse W. Beams Professor of Physics. Much of Gallagher's research has been focused on Rydberg Atoms, understanding their intrinsic properties and using their exaggerated properties to explore unusual physical situations. He has written the monograph, Rydberg Atoms, on this topic.

Currently the collisional interactions among cold Rydberg atoms, their response to intense short microwave pulses, and the time domain response in two valence electron atoms are under investigation. He and his colleagues have also developed modulation techniques for the spectroscopic detection of trace amounts of molecular gases.