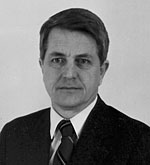 
"For proposing and working to keep on track the historic agreement for the US to purchase uranium from the former Soviet Union weapons stockpile and to transform it from highly enriched uranium to low-enriched uranium for civilian purposes, thereby significantly reducing the numbers of nuclear weapons."


Dr. Neff received his BA degree from Lewis and Clark College in Portland, Oregon and his Ph.D. in theoretical physics from Stanford University in 1973. He then held postdoctoral positions at Berkeley, Stanford and MIT. At Stanford, he was Executive Assistant to W.K.H. Panofsky, President of the American Physical Society, working on matters of science and public policy, and assisting in the development and oversight of the first studies conducted by the APS, and the formation of the Panel on Public Affairs. At MIT, he also served as the first Program Coordinator of POPA.

Dr. Neff subsequently served as senior staff member of the Ford Foundation's study of nuclear power and nonproliferation issues (Nuclear Power Issues and Choices) which was influential in reshaping US nonproliferation policy. From 1977 to 1985, he served as Manager and Director of MIT's International Energy Studies program, with an emphasis on integrating economics, finance, and political science with science and technology studies of international oil, gas and nuclear fuel markets and of energy technology development. He is the author of several books and many articles on oil and nuclear fuel markets, solar energy, and other topics in journals ranging from Physical Review to Foreign Affairs.

As a senior member of MIT's Center for International Studies, Dr. Neff in October 1991 proposed to both US and Soviet authorities a mechanism by which the destruction of large numbers of nuclear warheads could be financed by the conversion of 500 to 1,000 tonnes of highly-enriched uranium (HEU) in such warheads to fuel suitable for use in civil nuclear reactors. For more than 5 years he served as independent intermediary and advisor to both governments in the policy and business implementation of the resulting swords to plowshares deal between the US and the Russian Federation and related matters, such as compensation to former republics for nuclear weapons withdrawal. Dr. Neff is also currently involved in defense conversion activities with major weapons production facilities in the former Soviet Union.

Dr. Neff is a Fellow of the American Physical Society and a past member of the Council of the Federation of American Scientists. In the US, he has served as advisor to the Department of State, the Arms Control and Disarmament Agency, the Executive Office of the President, the Department of Energy, the Congress, and other government agencies. He has also served as an advisor to governments and companies in Europe, Asia, Africa, Australia, North and South America, and Central Asia.