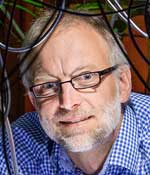 
"For pioneering, field-opening contributions to the physics of Rydberg atoms in ultracold and room-temperature gases, and for the first observation of ultralong-range polar Rydberg molecules."


Tilman Pfau, Ph.D. is a full professor and chair of phototonics at the University of Stuttgart (Germany). He completed his undergraduate studies in 1992 at the University of Konstanz (Germany) where he also received the Ph.D. in the field of atom optics under the supervision of Prof. Jürgen Mlynek in 1994. In 2000, he founded a new institute at the University of Stuttgart for the experimental study of interacting many body systems, including gases of ultracold dipolar magnetic atoms like Chromium and Dysprosium, as well as interacting Rydberg atoms in ultracold and hot gases. Dr. Pfau pioneered the cooling and the study of dipolar quantum gases starting from the first observation of dipolar effects in a chromium condensate, to the recent observation of self-bound droplets of a dilute magnetic quantum liquid. He has studied the Rydberg excitation of atoms in a quantum gas, and observed the first ultralong-range Rydberg molecules, as well as investigated the exaggerated properties of this novel kind of molecule. He has organized various large-scale outreach activities, and serves as a spokesperson for various research networks. He also is co-director of the Center for Integrated Quantum Science and Technology (IQST) in Stuttgart and Ulm (Germany). An elected fellow of the Optical Society, the American Physical Society, and the American Association for the Advancement of Science, he also is a member of German and European physical societies. Dr. Pfau received the 1998 Rudolf-Kaiser Award and in 2014, the Gentner-Kastler Prize of the Société Française de Physique and the German Physical Society.