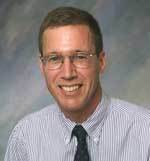 
"For the design and implementation of multiple resonance methods that elucidate the potential energy landscapes of flexible biomimetic molecules and their hydrates by optical control of isomer populations."


Timothy S. Zwier received his B.S. degree from Calvin College in 1977 and his Ph.D. in chemical physics from the University of Colorado-Boulder in 1981, under the joint supervision of Stephen R. Leone and G. Barney Ellison. He then spent two years as a post-doctoral research associate at the James Franck Institute of the University of Chicago, working with Donald H. Levy. From 1983-88, he was an assistant and associate professor of chemistry at Calvin College. In 1988 he moved to the Dept. of Chemistry at Purdue University, becoming associate professor in 1993 and full professor in 1997. Since 2004 he has been department head there. He received a Sloan Fellowship in 1989, and became a Fellow of the American Physical Society in 2000. He was editor of International Reviews in Physical Chemistry from 1998-2003, and since 2003 has been a Senior Editor of The Journal of Physical Chemistry. His current research involves the development and use of laser-based, multiple-resonance methods to probe the spectroscopy and dynamics of flexible biomolecules and molecular clusters. He also applies these techniques to molecules and free radicals of importance in combustion processes and planetary atmospheres.