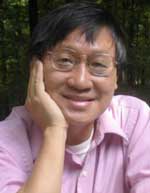 
"For his contributions to quantum liquids and dilute quantum gases, both multi-component and rapidly rotating, and for his leadership in unifying condensed matter and atomic physics research in this area."


Tin-Lun Ho graduated from Chung Chi College, Chinese University of Hong Kong in 1972. He attended the University of Minnesota in 1972-73. He transferred to Cornell University in 1973 and received a Ph.D in 1977 under the supervision of N.D. Mermin. He was a postdoc with C.J. Pethick at University of Illinois and NORDITA from 1978-80, and a postdoc at the Institute for Theoretical Physics at UC Santa Barbara from 1980-82. He became an Assistant Professor at Ohio State University in 1983, an Associate Professor in 1989, a full Professor in 1996, and a Distinguished Professor of Mathematical and Physical Sciences in 2002. He was elected an Alfred P. Sloan Foundation Fellow in 1984, a Fellow of the John Simon Guggenheim Foundation in 1999, and a Fellow the American Physical Society in 2000. He has contributed to a variety of areas in condensed matter physics, including quantum liquid, quasicrystals, and quantum Hall effect. His early work on superfluid He-3 is among the earliest applications of topological ideas in condensed matter. In the last decade, he has been working on a wide range of problems in dilute quantum gases, and fostering communications between condensed matter physics and atomic physics communities. He is also known as Jason Ho among his friends.