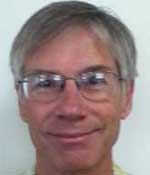 
Dr Osborne grew up in Kansas City, Missouri and received his BS in physics from the University of Missiouri-Rolla in 1976. He then attended the University of Wisconsin-Madison, where he joined the plasma physics group with Professor Stewart Prager as his thesis advisor. At the UW Dr. Osborne carried out experimental research on the early poloidal divertor tokamak Tokapole II, receiving his PhD in 1984 with the thesis topic of “Disruptive Instabilities in a Poloidal Divertor Tokamak.” From 1984 to present Dr. Osborne has been a scientist in the experimental group on the DIII-D tokamak at General Atomics in San Diego, California. His current research interests include the H-mode pedestal structure and ELMs, RMP ELM suppression, small ELM regimes, QH-mode and VH-mode. Dr. Osborne is an avid cyclist, skier, and sailboarder.