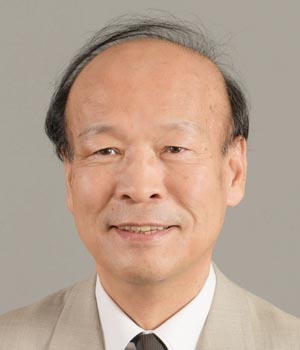 
"For the ground-breaking development of novel computational methods, and for leading seminal experimental investigations of low temperature plasmas and their applications."


Toshiaki Makabe received his BSc in 1970, MSc in 1972, and PhD in 1978 in electrical engineering all from Keio University. In 1975 he joined Keio University. He became a Professor of Electronics and Electrical Engineering at Keio University in 1991. He was the Dean of the Faculty of Science and Technology (2007-2009), and then served as the Vice-President in charge of research at Keio (2009-2017). Now he is a Professor Emeritus at Keio University. He was a guest professor at POSTECH, Ruhr University Bochum, and Xi’an Jiaotong University. Makabe’s research activities have focused on the study of low-temperature radiofrequency plasmas, in particular, electronegative ones by way of modeling, transport theory, and diagnostics using time and space resolved emission CT. In 2000 he integrated his modeling into Vertically Integrated CAD for Device Processing. Prof. Makabe graduated 26 PhDs. He has authored books including Plasma Electronics: Applications in Microelectronic Device Fabrication (2nd eds. 2014 CRC). He is a Fellow of the Institute of Physics (2001), the Japan Society of Applied Physics (JSAP) (2007), the American Vacuum Society (AVS) (2008), and the Japan Federation of Engineering Societies (2012). Prof. Makabe is a foreign member of the Serbian Academy of Sciences and Arts (2013). He received Fluid Science Prize from IFS Tohoku University in 2003; Plasma Electronics Prize from JSAP in 2004; AVS Plasma Prize in 2006; and DPS Nishizawa Award from JSAP in 2017.