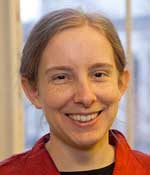 
"For innovative theoretical calculations and data analyses of the multi-wavelength sky to probe the nature of dark matter."


Tracy R. Slatyer, Ph.D., is an assistant professor of physics at the Massachusetts Institute of Technology Center for Theoretical Physics (Cambridge), where she holds the Jerrold R. Zacharias Career Development Professorship. Her research into the possibility of "dark forces has inspired a broad range of new experiments. She has developed new analyses to constrain the properties of dark matter using the cosmic microwave background and to isolate and study possible signals of dark matter annihilation in Galactic gamma rays." Prior to joining the faculty of MIT in 2013, Dr. Slatyer was a postdoctoral member of the Institute for Advanced Study in Princeton, New Jersey. She received her Ph.D. from Harvard University (Cambridge, Mass.) in 2010, after having graduated with honors from the Australian National University in 2005 with a degree in theoretical physics. The U.S. Department of Energy awarded Dr. Slatyer an Early Career Award in 2015, when she also won MIT’s Buechner Faculty Award for Undergraduate Advising. Although Dr. Slatyer’s work has ranged from formal particle theory to high-energy gamma-ray astrophysics, her primary focus is on the search for dark matter, especially the constraint of the properties of dark matter using astrophysical and cosmological datasets. The American Astrophysical Society recognized Dr. Slatyer and her colleagues in 2014 with the Rossi Prize for their discovery of giant galactic structures called Fermi Bubbles.