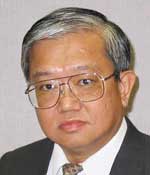 
"For expert leadership in semiconductor technology development and deployment, as well as basic science stewardship."


Tze-Chiang “T.C.” Chen, Ph.D., is an IBM fellow and a vice president at the IBM Thomas J. Watson Research Center in Yorktown Heights, New York where he is as an adviser to IBM Research leadership in areas of strategic physical science, including nanoscience and technology, advanced semiconductor science and technology. For more than 30 years, Dr. Chen has driven major innovations in silicon microelectronics technology with contributions spanning across scientific research, development, and product manufacturing. Dr. Chen is a fellow of the American Physical Society, the Institute of Electrical and Electronics Engineers, IEEE and of the School of Engineering, University of Tokyo (Japan). He was named IBM fellow in 1999 for sustained technical excellence and leadership. Dr. Chen was honored with the IEEE Ernst Weber Engineering Leadership Recognition in 2011. Other honors include being named the 2005 Asian-American of the Year and receiving the 2006 Yale Science and Engineering Association Award for Distinguished Service to Industry, Commerce, or Education. Dr. Chen received his B.S. and M.S. degrees in physics from the National Cheng-Kung University (China) in 1974 and 1976, respectively, and his M.S. and Ph.D. degrees in engineering and applied science from Yale University (New Haven, Conn.) in 1979 and 1985.