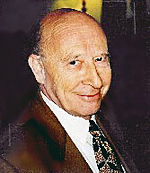 
"For his ingenious experiments to determine the characteristics of the elementary particles, for his discoveries concerning the nature of the weak forces of nature as revealed by the capture and decay of muons, for his rigorous analysis of particle interactions, and for his ability to inspire and enlighten diverse audiences."


The Lilienfeld Prize was established in 1988 under the terms of a bequest of Beatrice Lilienfeld in memory of her husband, Julius Edgar Lilienfeld. It is intended to recognize outstanding contributions to physics by an individual who has also demonstrated exceptional skills in lecturing to diverse audiences. The prize includes expenses for three lectures to be given by the recipient at an APS general meeting, a research university, and a predominantly undergraduate institution.