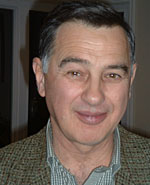 
Dr. Valery Godyak is a Corporate Scientist at OSRAM SYLVANIA, Beverly, MA. He received the Engineer-Physicist degree (an equivalent of M.S.) in physical electronics from the St. Petersburg Technical University, St. Petersburg, Russia, and Ph. D. degree in plasma physics from Moscow State University (MSU), Moscow, Russia, in 1964 and 1968, respectively. In 1964 he became an Assistant Professor of Physics at the Ryazan Radio University, Ryazan, Russia. In 1968 he joined the Laboratory of Fusion Engineering at the Institute of Electro-Physical Apparatus, St. Petersburg, where he conducted research and development on high-current relativistic electron accelerators, particularly on field emission, electron optics and diagnostics of relativistic electron beams. In 1972 he returned to the Physics Department at MSU, where he was Group Leader involved in the basic research of RF discharges. In 1980 he was expelled from MSU in for ideological reasons. Forbidden to hold a professional job at that time, he worked as an elevator boy and then as an electrician at one of Moscows hospitals. Then, in 1984 he emigrated to the United States and joined GTE Corporation (currently, OSRAM SYLVANIA).

Dr. Godyak has made significant contributions to the development of the present understanding and basic concepts of RF discharge physics. He was the first to recognize (then prove in experiments) that collisionless power absorption and nonlinear phenomena (that are typical for fusion and space plasmas) are the underlying mechanisms of low-pressure capacitive and inductive RF discharges. These discharges are successfully utilized in lighting technology and in the manufacture of semiconductor chips. As a Corporate Scientist Dr. Godyak initiated and led research programs on novel light sources based on RF plasmas. Dr. Godyak is an inventor and a major contributor to revolutionary company products: ICETRON-ENDURA, a powerful, long life RF lamp, and a compact RF lamp suitable to replace less efficient and short-lived incandescent bulbs. His works are represented in numerous publications, US Patents and textbooks written by others. Dr. Godyak is a winner of OSRAM STAR, SIEMENS International Innovation Competition and  OSRAM SYLVANIA Innovation  awards. He is a Fellow of the American Physical Society and a Fellow of the IEEE.