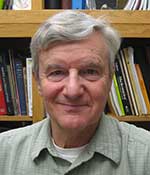 
"For persistent dedication to the improvement of advanced undergraduate laboratories at the University of Chicago, the consistent support of student success, and for promoting the national discourse on advanced laboratories."


Van D. Bistrow received his B.A. with an emphasis on philosophy of science from the University of Wisconsin-Madison in 1966 and his M.A. in teaching physics in 1973 and his M.S. in physics in 1974, both from the University of Chicago. In 1974 he began working full-time in the instructional labs at UChicago, and in 1997 he was promoted to Director of Instructional Labs. In this capacity he teaches, develops lab exercises, writes lab manuals, trains TAs and is a member of the Physics Department's Teaching Activities Committee. As a member of the American Association of Physics Teachers (AAPT) he has led workshops on Advanced and Intermediate Instructional Labs, served on and was spokesman for the AAPT Advanced Labs Task Force, helped with the design of AAPT's Advanced Labs website, and was co-organizer and presenter at the Conference on Instructional Labs "Beyond the First Year" at the University of Michigan, Ann Arbor.