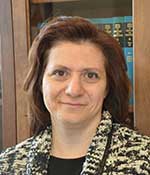 
"For key contributions to the study of the electromagnetic and gravitational wave radiation from binary compact objects, including the now-verified prediction that neutron star mergers produce short gamma-ray bursts that will be found in all galaxy types."


Vicky Kalogera received her B.S. in physics in 1992 from the University of Thessaloniki in Greece and her Ph.D. in astronomy in 1997 from the University of Illinois at Urbana-Champaign. She did her postdoctoral studies at the Harvard-Smithsonian Center for Astrophysics as a CfA Fellow and as the inaugural Clay Fellow. Kalogera joined Northwestern University in 2001, and was named the Erastus Otis Haven Professor of Physics and Astronomy in 2009. She is a co-founder and current Director of the Center for Interdisciplinary Exploration and Research in Astrophysics (CIERA). Her research is in the area of compact objects, their formation and evolution in single and multiple systems across varied environments and redshifts. Among her awards are the Packard Foundation Fellowship in Science and Engineering, the APS Goeppert-Mayer Award, the Cottrell Scholar Award by the Research Corporation, the NSF CAREER Award in Astronomy, the AAS Cannon Award, and a Fellowship in Theoretical Physics by the Simons Foundation.