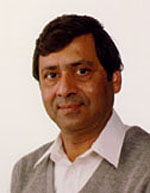 
"For fundamental contributions in determining the structure of light nuclei by solving the Schroedinger problem with more than three nucleons using realistic nucleon-nucleon interactions supplemented by three-body forces."


Dr. Pandharipande joined the Tata Institute of Fundamental Research in Bombay after receiving a M.Sc. degree from Nagpur University in 1961. He received his Ph.D. from Bombay University in 1969, while at the Tata Institute, and came to the University of Illinois at Urbana-Champaign, his present position, in 1972. He visited the in Copenhagen for a year in 1970 and Cornell University in 1972, and has a visiting faculty appointment at the Physics Division, Argonne National Laboratory since 1983.

Dr. Pandharipande's research interests include nuclear forces, structure and reactions, quantum liquids and their drops, and dense matter and neutron stars. He is a life member of the Indian Physical Society and a Fellow of the American Physical Society.