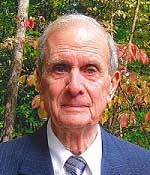 
"For exemplary leadership of corporate automotive R&D at a critical time for the industry and for important individual achievements in experimental solid state physics."


All academic majors were in Physics starting with a BA from Wabash College in 1949 followed by MS from the University of Oklahoma in 1951 and PhD from the University of Illinois in 1955. Employment activities included Research Scientist at the US Naval Research Laboratory from 1955 to 1961; the University of Illinois from 1961 to 1970 as Associate Professor of Physics 1961-1964, Professor of Physics 1964-1970 including the Director of the Coordinated Science Laboratory 1965-1970; The Ford Motor Co. Research Staff from 1970-1986 as Director of the Physics Laboratories 1970-1972, Executive Director of Research 1972-1973 and Vice-President of Research 1973-1986; Senior Fellow National Academy Engineering 1986-1988; followed by Purdue University 1988-2004 as Lillian Gilbreth Distinguished Professor of Industrial Engineering and Emeritus 2004-present. Current research activities focus on the development of processes that enhance the productivity of metal removal processes in the manufacturing sector. Awards include election to the National Academy of Engineering in 1981, honorary Doctorate of Engineering Michigan Technological University 1976, fellowship in the American Physical Society 1960, the AAAS 1975, Engineering Society of Detroit 1978, the Society of Automotive Engineers 1984; and membership in Institute of Industrial Engineers. Awarded the ASME/SME Eugene Merchant Manufacturing Medal 1999 and the University of Illinois Engineering College Distinguished Service Award 2003.