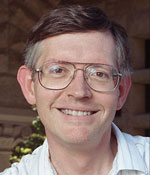 
"For making major contributions to the chemical physics of biological systems and non-biological materials through the application of single molecule spectroscopy."


William E. Moerner, the Harry S. Mosher Professor of Chemistry and Professor, by courtesy, of Applied Physics, at Stanford University, has conducted research in the areas of physical chemistry and biophysics of single molecules, nanophotonics, photorefractive polymers, and trapping of single nanoparticles in solution. He received three Bachelors degrees from Washington University in 1975 and the Master's and Doctoral degrees in Physics from Cornell University in 1978 and 1982. Employment history: Research Staff Member and Manager, IBM Research in San Jose, CA (1981-1995); Guest Professor of Physical Chemistry, Swiss Federal Institute of Technology, Zurich (1993-1994); Professor and Distinguished Chair in Physical Chemistry, University of California-San Diego (1995-1998); Robert B. Woodward Visiting Professor, Harvard University (1997-1998); and Professor, Stanford University (1998-). A life member of the American Physical Society, he was named Fellow in 1992 and received the Earle K. Plyler Prize for Molecular Spectroscopy in 2001. He also holds Fellowships in the Optical Society of America, the American Academy of Arts and Sciences, and the American Association for the Advancement of Science. He was elected Member of the National Academy of Sciences in 2007, and received the Wolf Prize in Chemistry (with Allen Bard) in 2008.