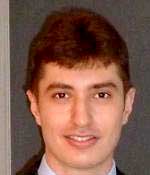 
Waseem Bakr started his studies in physics as an undergraduate at MIT in 2001. His first exposure to research was at the Laser Interferometer Gravitational Wave Observatory (LIGO) under the supervision of Prof. Nergis Mavalvala. Later in his undergraduate career, he joined the ion trap quantum computation group of Prof. Isaac Chuang. In Chuang's lab, Waseem developed an apparatus for trapping strontium ions in a cryogenic environment close to the surface of a chip and had his first experience of observing individual quantum particles in the form of linear crystals of ions. After writing an M.Eng. thesis on this topic in 2006, he moved to Harvard University where he started doctoral research in the group of Prof. Markus Greiner. Waseem's doctoral dissertation introduced "quantum gas microscopy", a technique for imaging and manipulating strongly-correlated systems of ultracold atoms in optical lattices at the single atom level. Using this microscopy technique, Waseem performed site-resolved studies of two quantum phase transitions: the superfluid to Mott insulator transition in a gas of bosons and a paramagnetic to antiferromagnetic transition in a chain of Ising spins. The work was selected by Science magazine as one of the top ten breakthroughs of the 2010 and was recognized by the 2011 AAAS Newcomb Cleveland Prize. Since defending his dissertation in 2011, Waseem returned to MIT to join the group of Prof. Martin Zwierlein as a postdoctoral research fellow, where he is studying ultracold Fermi gases in lower dimensions and with spin-orbit coupling, with the goal of realizing topological phases of matter. Simultaneously, he is working on extending the techniques of quantum gas microscopy to fermionic atoms in optical lattices.